Nobility, a fine name for a fine project. The first to bridge the gap between esports gaming and cryptocurrency. At first glance it seems like any other professional eSports outfit but under the hood they are hiding a whole armory of features that you are already missing out on!

They are hosting tournaments with lucrative prize pools across a range of different games with plans to run these even more regularly, a roster of big names have also been taking part like Max Holloway the UFC Featherweight Champion, Temperrr from FaZe Clan and Chase Claypool, wide receiver from the Pittsburgh Steelers.

Combining the innovations of blockchain technology and decentralized finance with the esports gaming industry in order to create an entirely new but globally scalable system in which all participants, both content creators and viewers; are rewarded fairly. This is the Nobility vision.

The Nobility token ($NBL) acts as a bridge for all the elements of esports to make the cross over into the world of cryptocurrencies. All $NBL holders receive rewards from holding the tokens, the more tokens held and the longer they are held for the more a holder will benefit, this is very much like staking however it is completely automated so could be considered passive income, you can get an idea of the reward system by looking the table below. 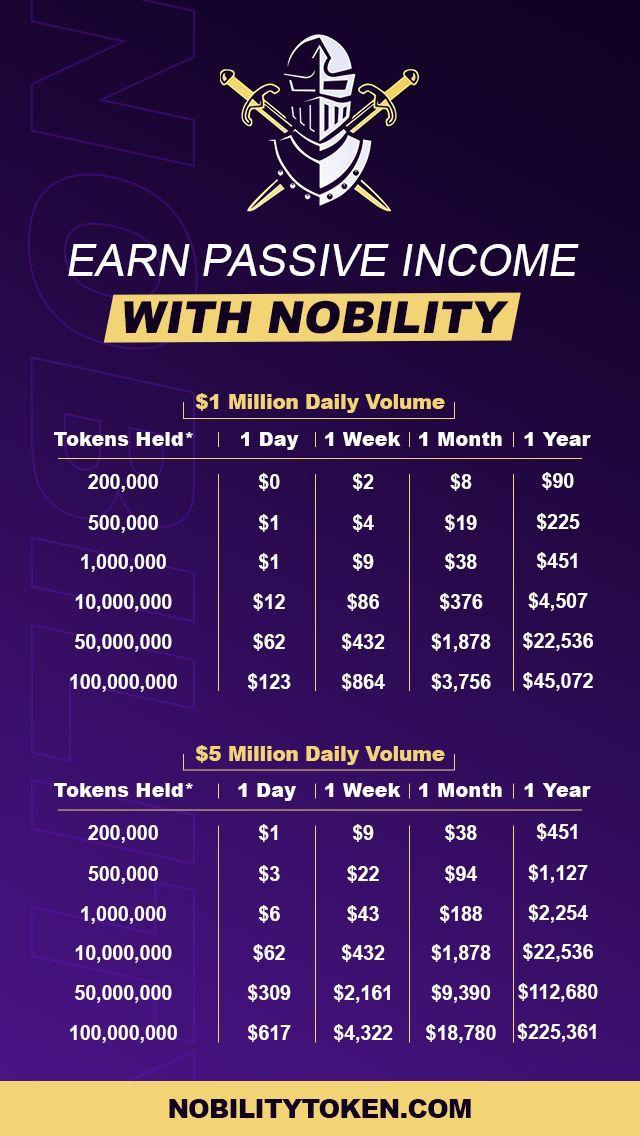 There’s a fee applied to all swaps and transfers on the network, this is then divided as follows:

·      7% is re-distributed proportionally to qualifying holders in BUSD in the form of reflections (must hold a minimum of 200K $NBL).

·      2% is added to the Liquidity Pool (LP) for increased market stability.

What is also very important to note, is that all the excess tokens that were left after the initial launch were burned in order to seed the burn address to start receiving reflections. As a result, the burn address receives a portion of the total reflections just like any other wallet, therefore the tokens received by the burn address are also permanently removed from the circulating supply which is another great feature of this token and only serves to benefit holders.

Nobility is providing a once-in-a-lifetime opportunity to be part of a unique and game-changing project that isn’t just here to stay but here to take over. Anyone interested in acquiring $NBL tokens can do so via LBank Exchange and PancakeSwap, the Nobility website also has a slick 24/7 live chat support that can assist you with this and any other questions you may have.

Find the Nobility socials below: